Welcome to our new blog; maintained by our Club Captain. We hope you will find it of interest and we welcome your input (keep it clean or we will delete it).

A new season is upon us, and I must admit I've been a bit tardy in getting the Captain's Blog going this season.

I'm sure most of you have been out playing as many rounds as possible, and you all must agree that the course is in incredible condition.  It's only May and we are playing on a course that we normally see in July. Therefore, a special thanks must go out to Ryan and his crew. Please make sure when you see Ryan out and about to thank him for his great work.

I am certain you are all becoming familiar with the new features in GGGolf and how it works for booking tee times, submitting ballots, and entering tournaments. The one feature that appeals to me is the score tracking system. This lets you know if you have entered all your scores, and will be reviewed prior to tournaments.  Also from time to time handicaps will be reviewed to make sure we are all up-to-date with score entries.  Please make sure your percentage entry is at 100.

Results for all tournaments can be viewed on the website, as well as on the Captain's Blog.

During the 2017 season I look forward to receiving any feedback and/or any positive suggestions that you may have.

In the past this has meant slow rounds of golf.  Our regular rounds with buddies on the weekend normally take around 4 hours to play.  In these rounds we give putts, drop balls on the side of the trees and not go back to the tee if they are lost.

Club Championship weekend is somewhat different - we spend more time on the greens and putt out everything.  We look for lost balls a little longer and we wait for the next person to hit, rather than playing ready golf. All these little things add time to the round, then it's finger pointing time when we get back to the club house after a slow round - which in the past has been in excess of 5 hours.

Let's try and speed up play this weekend, and play between 4 and 4 1/2 hours. As members we all know the greens, so don't start lining up putts from 4 different angles,  (we don't normally do it) putt continuously,  providing you're not on someones line. Hit provisional balls, be ready to hit at all times, don't wait for someone to hit, then go through your own routine.  Do the same on the greens. BE READY to play your next shot.

Always keep up with the group ahead of you.

We will have Marshals on the course this weekend, and slow play WILL BE PENALIZED.

GOOD LUCK TO ALL AND HAVE A GREAT WEEKEND

Where this applies at Redwood Meadows.

Immovable obstructions are not plentiful at Redwood, but there are a few, like the green irrigation boxes, sprinkler heads and yardage markers. You get relief from these obstructions - without penalty - only if they are interfering with your stance and or swing path.  If they interfere with your intended ball flight after hitting the ball, there is no relief.
The relief without penalty is one club length from the nearest point of relief, no nearer the hole. 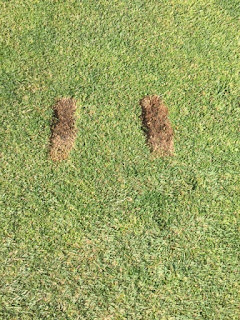 WOULD YOU LIKE YOUR BALL
TO LAND IN ONE OF THESE?

This photo was taken early Friday morning on the 6th hole, so not many golfers had passed by. The question is "would you like your ball to land in one of these lovely gouges"? Probably not.

Ryan and his crew are doing an excellent job working on our course and getting it in tip top condition, so as golfers lets help make Ryan's job a little easier and repair all your divots. Before teeing off on either the first hole or the 10th hole make sure you take a sand container or two with you, and repair all your divots and any others that have been missed. soon there will be no divots like the ones shown above.

Our course is looking and playing in great condition, do your part in keeping it this way.

At Redwood Meadows, we are getting close to some of the major tournaments of the season, i.e. club championships, Ryder and Solheim cups, and also the mens closing tournament. Here is a rule that must be adhered to before and during these competitions.

PRACTICE
7-1 Before or between Rounds

a, MATCH PLAY
On any day of a Match-play competition, a player may practice on the competition course before a round

PENALTY FOR BREACH OF RULE 7-1B

Where does this apply to Redwood. If the tournament is set to be a shot gun start. Let's say your tee off hole is hole 13, and you are playing in a stroke play tournament, you CANNOT practice putting on the 12th hole green. If playing in the Ryder or Solheim cup, which are both Match Play tournaments, then practicing would be allowed.

Welcome all members of Redwood Meadows, Golf and Country Club.

This is the first posting of a new information site linked to the Redwood Members web site.

This site will be used by the club captain to post articles on golf, primarily Rules of Golf and where they would apply when playing Redwood Meadows.  From time to time posts will include golf etiquette, and also the care of the golf course while out enjoying a round.

As your club captain I appreciate any feedback, comments and/or suggestions about golf related items that you would like to share with all members.

Stay tuned for the next information posting.